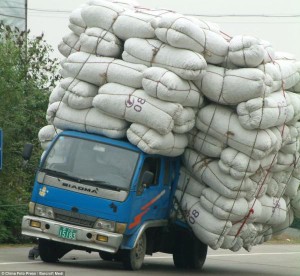 The transport sector is vital for the economic growth and social development of our continent. Traffic often grows faster than the economy. Africa has a large number of transport corridors which rely on road transport (more than 80%). Initiatives to move freight to rail have not yet been successful. In East Africa 95% of the cargo is transported by road. East Africa will continue to grow with opportunities from recent gas and oil finds, ongoing infrastructure projects and an increasing number of foreign investors moving into the region. EAC formed The East African Trade and Transport Facilitation Project.

The cost of transport in Africa can be as high as 40% of the value of the products. The global  average is 5%. How can we compete? Transporting goods in Africa often takes 3 times longer and is 3-5 times more expensive than in Europe, Asia and Latin America. 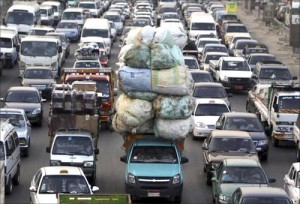 The main reasons for the high transportation costs, apart from fuel as the main cost driver, are poor road conditions and delays (NTBs). Are we addressing the NTBs? A lot of effort is already going into the faster clearing of goods e.g. Mozambique, Uganda, Kenya.

Road infrastructure has to be protected, cost effectively managed and maintained. Are we focusing too much on the development only? The damaging effect of overloading on the road infrastructure is exponential.  Why is the transport sector destroying its own life line?

In 2007 the problem of overloading was identified as a very high priority for Africa by the regional organisations. What went wrong? Why did we allow it to become an “us vs them” war? Are we serious about facilitating trade? 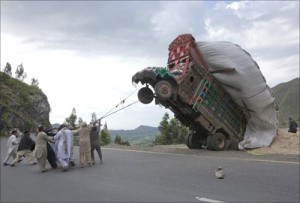 Africa is awakening to the concept of protecting the road infrastructure. Southern and Eastern Africa are already in the process of regional harmonisation, standardisation and co-operation. Examples such as the African Strategic Infrastructure Initiative, the Regional Infrastructure Development Master Plan and the Tripartite Regional Economic Communities. Infrastructure development is currently a focus point in Africa.

During 2010, several West African countries started implementing standard axle weight rules, but it was not regarded as successful. The harmonisation of legislation is still an ongoing objective. Currently, there are new initiatives in Ghana and Nigeria.

Stability of the loads

THE EFFECTS OF OVERLOADING

SOME PERCEPTIONS ABOUT OVERLOADING from AFRICA

Governments believe that more weighbridges and heavier fines will stop overloading. There are over 260 known weighbridges operating in Africa. At least another 40 weighbridges are planned for Africa. Do we need all of them?

Facilities, equipment, systems and technology are often outdated. Can we afford the infrastructure and how do we assist poor countries?

Weighbridge operations are regarded as corrupt, inconsistent and using outdated technology. Upgrading in some places not supported by the beneficiaries. No control over prosecution processes.

Operating weighbridges is a state responsibility. The private sector is only involved in some countries. It should be a joint and integrated effort.

Can more affordable mobile weighbridges be used for prosecution?

A weighbridge should protect a specific road? Overload control strategies should focus on regions and not only one stretch of road.

Operators think that a heavy vehicle can only be overloaded on it’s gross vehicle mass. Axle overloading can actually do more severe damage to the road.

Governments rule that all heavy vehicles should be weighed on a static scale. A lack of screening and incentivising legally loaded vehicles causes this practice to have a negative effect on trade.

Information on traffic and overloading, if it exists, is mainly local, not regional and rarely national, complicating efforts to develop a national overloading control strategy.

Habitual offenders are often not addressed.

Weighbridges should be “profitable”. The “profit” of a weighbridge is in the huge savings in road maintenance from controlling overloading and not in the transport operators paying for fines or to be weighed.

Certain very dangerous and overloaded vehicles are not weighed. Weighing of buses, tankers, cooling trucks, abnormal vehicles and vehicles carrying live stock is controversial. These vehicles have the same damaging effect on the road and road safety.

OBJECTIVES and PRINCIPLES OF AN OVERLOADING STRATEGY 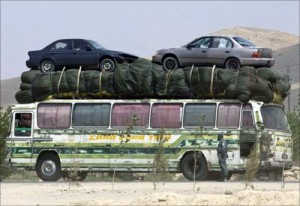